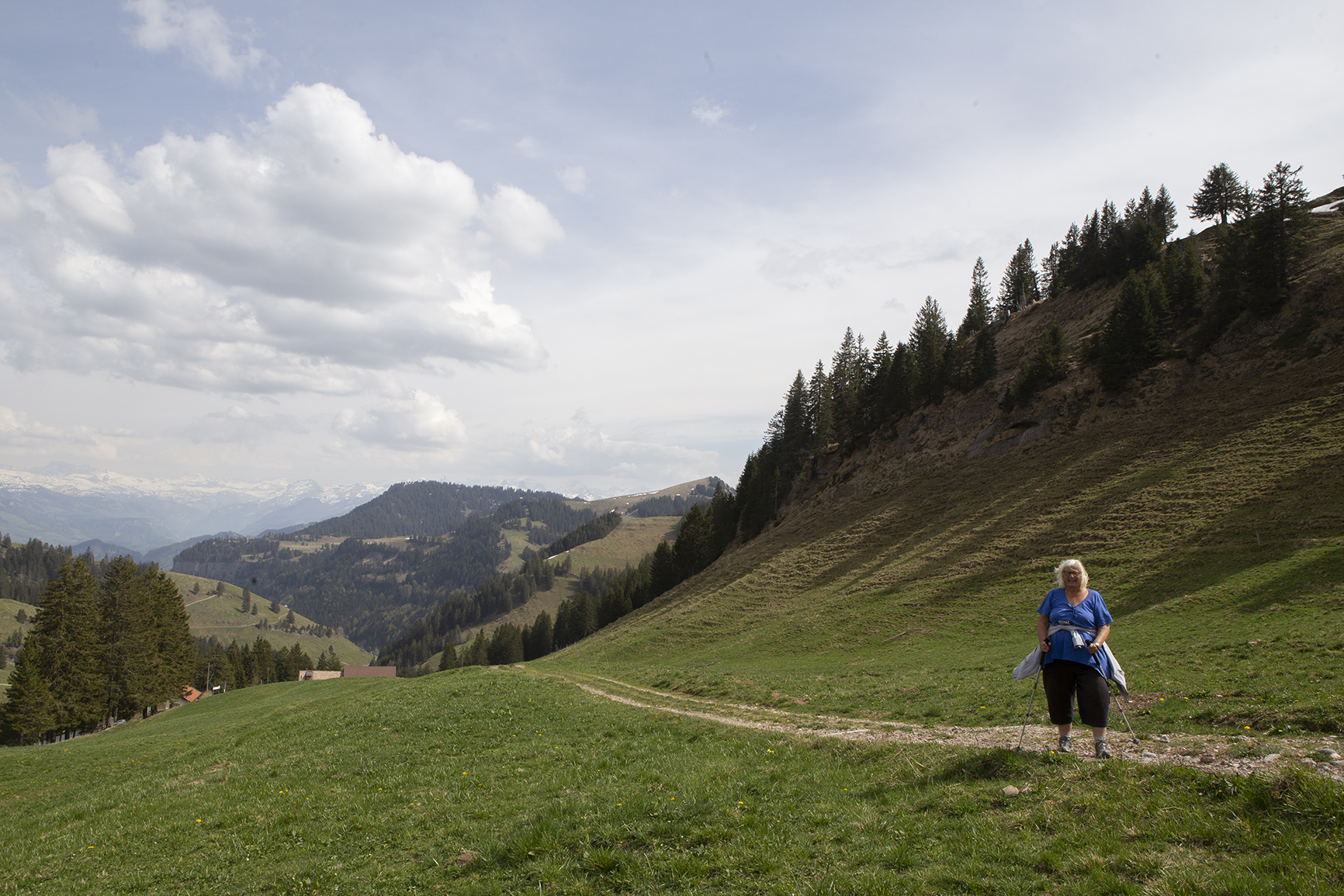 We have been breathing the fresh country air on our terrace while admireing the view of the Alps. We have been enjoying cold local beer at a local outdoor farmhouse pub while listening to the cows eating. Lockdown? Who is he? Do we know him? Have we met him at all?

While people all over the globe have been complaining over rather hard restrictions, we have been asking ourselves what it has really been about! Nobody has ever tried to stop us from going shopping, exercising on the local pathways or taking our garbage out!

On a more serious note, we are not trying to mock the fact that the corona pandemic has caused a lot of misery the world over, from lost businesses and lost incomes and lost lives. The sad sides of the situation has come rather close to us as well, DH’s aunt died in hospital in May after having spent the last months of her life totally cut off from her loved ones. A lot of people, us included, were not able to go to the funeral to say goodbye. Of our two home countries Norway has been a healthier place to be than Switzerland, but the economy has been hit very hard. Still, an advantage of being a pensioner is that the money arrives every month even if we make no attempt to work for it!

What we are actually trying to say is that we have had a lot more luck with our three months of lockdown than most people. After travelling to Switzerland for a winter visit ES broke her arm in March just a couple of days before we were due to return to Norway. As a direct result we were not able to travel at all. As it turned out, our Swiss mountain resort was a much better place to lock ourselves down in, than our official home in Oslo city center. We had more space and more freedom both indoors and outdoors, we had more family close by as we ended up sharing our flat with The Daughter, and we basically had a pretty nice time. The Daughter had been on a long planned tour of the world when the pandemic struck. She had quit her job and her flat, but had to travel back to Switzerland in a hurry to ride out the storm staying with us!

She was not the only traveller who had to stop travelling. Our mountain village is a proper tourist hot spot, but suddenly nobody was allowed to come anymore! This was bad for local business of course, but good for local health. To our knowledge our community have not had one single case of the bug at all.

All in all we have counted the days and our blessings and enjoyed life. As long as the village shop stayed open we could tolerate the restaurants being closed. The local shopkeeper started an improvised net service; we sent him a list in the evening and by 9 am he had prepared our stuff in a cart in the back room. We had to go to there and pick it up, but we did not have to enter the building!

One restaurant even handed out free meals every Wednesday for two full months! we vewry much recomend them to anybody passing by, the Kräuterhotel Edelweiss, they even have a Michelin star! Their generous offer was to local residents «in the risk group», and a quick look at our birth certificates revealed that we qualified for the service! The Bug, according to the news, is not so bad for young people but a serious threat to the elderly. The elderly should not take any chances, they should not babysit their grandchildren, they should stay well away from crowds. The elderly has always been somebody else, now it isn’t anymore. It was us, whether we liked it or not. And to be totally honest….we didn’t!

In real life we have had only one worry: we had to sell our Oslo flat during the month of May. It was a process that made us quite nervous. Instead of being hands on in decorating it, marketing it and showing it to potential buyers, we had to sit in another country remote controlling an estate agent via email and telephone. It was rather stressful. We had half a million Euro hanging on the deal without really knowing what was going on. Still, we got there in the end! Like most people who sell a house we wished we had gotten a little bit more, but all in all our man came up with a buyer who paid a price we could live with.

And finally, on June 6, it was time to leave. As it happened, it was four months to the day since our arrival in February for a visit that was meant to last five weeks. Flying Corona Airlines from Zurich via Frankfurt to Oslo was an experience in itself. Masks on, keep your distance and wash your hands even more often than usual! No hotel breakfast buffet, no tax free shopping, no pre-flight beer stop! It even gave us a short little lecture in different European regulations! In Zurich airport we had to keep a two meter distance, in Frankfurt it was 1,5 and in Oslo Gardermoen down to 1,0! In Sweden nobody bothers about anything as we all know, but luck had it that we did not have to go there!

We are now posting this from an Oslo apartment that is not really ours anymore. The chap who bought it does not take over until end of July, so we can enjoy our old hometown for another seven weeks. However, to be more exact, right now we have to restrict ourselves to enjoying it from our balcony. Before we can go anywhere other than to the grocery shop we have to serve a 10 day mandatory Norwegian quarantine. We look forward to seeing our Norwegian friends again, but a few days in a self-quarantine is a price we are very much willing to pay!

And before you ask, the answer is yes. We do miss our Swiss mountain walks, but we will do them again come September! 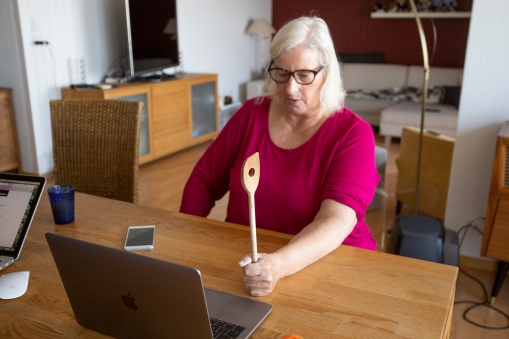 No, this is not ES doing a cooking class! She is actually doing an online physiotherapy session on her injured arm! 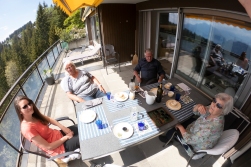 Party time! Our first guests after several months of our own were ES’ sister and her husband!

Hotel Edelweiss gave us free food once a week for almost two months, and we will definately pay them a more visitis when we come back to Rigi to stay. 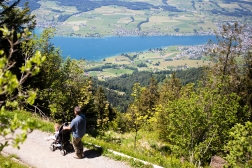 The cogwheel mountain railway passes right below our terrace, but with hardly any people on board. The company still run two cars to make sure there is enough empty space for everybody! 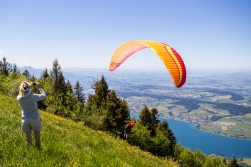 Eddie The Eagle taking off! Paragliding is popular on the Rigi, and this guy decided to take his chances on the train going up to the top. Unlike most others, he did not have to rely on public transport to get down again!

This splendid view is just 12-15 minutes walk from home. Our nearest proper city, Luzern, can be seen at the bottom of the bay to the upper right. 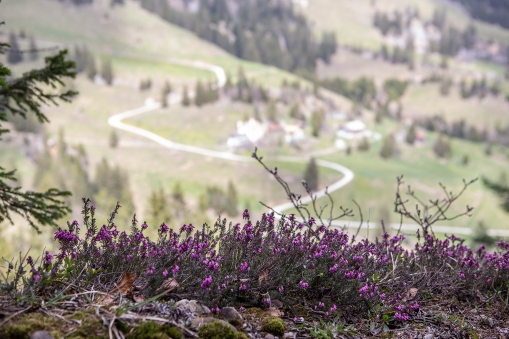 Mountain walks are hard to do if you have to spend lockdown in a city!

Telearbeit – useful for all? In a box of old papers ES found some vintage seminar papers from 2003 praising the advantages of working from home instead of going to the office. Very suddenly this was back in fashion!

The Daughter soon found a favorite pastime in her new home, reading academic literature in the living room window. 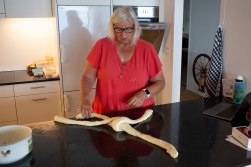 One of the typical cultural habits of the Swiss is baking a spider pretending it might turn into bread!

ES’ arm finally healed, and she could go back to knitting. With a keen amateur living in the same house she could even do some tutorials!

Indoor family life. It is good to have a bit of space when you end up in a situation you have not planned for!

Like Warren Zevon said it, don’t want nobody coming by without calling first! A bit into the month of May however, we dared to be a bit more social and allowed The Grandson and his owners to come by. Posing for a shot of ES and all her decedents, we even allowed them a bit closer than two meters! They stayed with us for a couple of nights, but not in our flat. We rented a studio from one of our neighbors to be on the safe side! 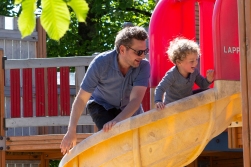 Nobody got sick during lockdown in our village – with the exception of The Grandson after he had eaten too much ice cream!

A trip to town! After three months of not leaving our local community we took the chance on a trip to Luzern. This was our first dinner out in since early March!

This beautiful classic Luzern cafeteria did not look as classy as it used to. The plastic dividers hanging from raw wooden beams between the tables might be good for stopping The Bug, but the room looks better without them. 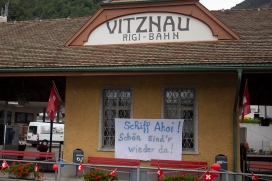 Ship Ohoi! After having been lying still since march, the public boats on our lake started up again on June 6. This also happened to be the day we left for Oslo, so we were very happy we could go from Vitznau to Luzern in style! 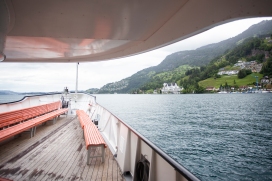 The best way of going to town! Our house can actually be seen here, way up on the hillside to the top right. 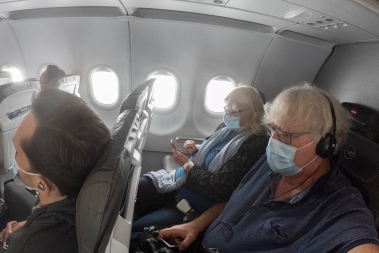 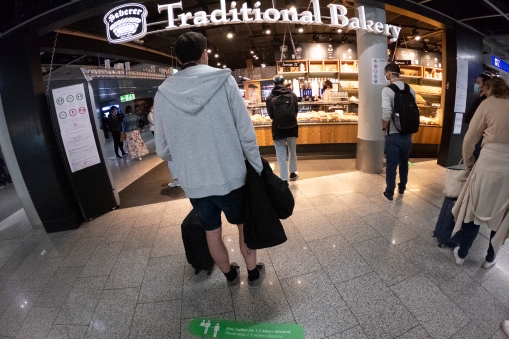 A Frankfurt stopover. In Switzerland we were supposed to stay two meters away from other people, in Germany it was 1,5 and in Norway only 1,0. Maybe The Bug behaves differently in different countries after all? 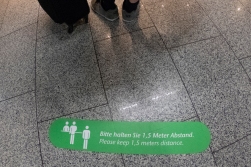 While we were in Switzerland, our Oslo flat was marketed and sold. The agent who did the sale called in a stylist, so in the ads our living room did not look like our living room at all. With us back, we are happy to say, the place is now back to its original state of disorganization. 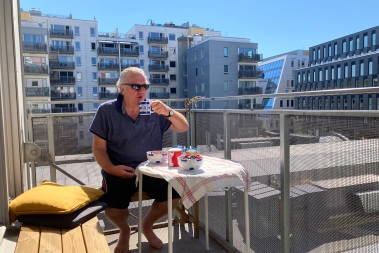 Another country, another terrace, another view, another lockdown. It will still be a few days before we can move freely around in what is, for another month and a half, our home town!