In todays world of climate change we are supposed to feel ashamed for flying and for eating meat and for driving a petrol car, so we should probably also be ashamed for travelling on a cruise ship. Still, that is exactly what we are doing. Our reason is as bad as it gets; we do it simply because we love it.

A good excuse? No, not really, we are aware of that much. But, when we did the three months round-the-world-trip with Costa Cruises in 2016, we accumulated mileage points from Italy to Timbuktu – almost literally – and our choice was to spend them or let them go.

So here we are on the good ship Costa Fortuna with 2800 other passengers and a 1200 or so crew making our way from Genova to Singapore. The ship does this trip at the end of the European summer to move from the Mediterranean to the Asian market, and it goes back the same way in March. The trip has taken us to Greece, thru the Suez Canal and down the Red Sea to Salalah in Oman, and then to India, Sri Lanka, Thailand and Malaysia before hitting Singapore after a total of 25 days.

Most of the places we visit we have been to before, but that is not a problem. In our experience the first visit to a new place is often the least interesting. It is when you come back again, some years and some books and some jigsaw pieces of knowledge later that you can start taking it in. That is why the Suez Canal is so intriguing; We know Egypt a bit, we have travelled the canal before, and we feel that we know what to look for. The same goes for Mumbai. Even if the Fortuna only gave us half a day there, it gave us a taste of something very special because we knew India from earlier visits.

There are some rules to cruise travel. One of the most important is that you do not go on a cruise believing you will experience the world. You won’t. You will experience some tiny little fractions of it, which can be very interesting indeed, but it will be like sitting there with one or two little pieces from a giant jigsaw puzzle. The pieces can be beautiful and fascinating and very rewarding to see and to touch, but you can travel the world for a lifetime and you will still sit there with a puzzle that is very much incomplete.

The Suez Canal we have done several times, this was the fourth crossing for DH and the third for ES. This is an experience that changes every time we do it, and in this case very much for the better! We travelled the canal north with a containership in 2013, and at the time there was still only one lane most of the way. We had the populated areas on our left hand / western side and the desert on our right. Three years later we travelled north again, on the Costa Luminosa, but by now there was a second lane to the east of the old one. Suddenly we had the sand on both sides. As a sightseeing experience the trip was pretty much a waste, because the new lane means that you see the full scenery only when you travel south thru the old western lane.

This time, however, that was exactly what we did! Again we had all the little towns and harbors and military camps and railway lines and highways close to the starboard side of the ship, and we had chosen a starboard cabin for this very reason. The English phrase POSH, for something rather upmarket and exclusive, is said to come from the best choice of cabin when the Victorian English travelled down to the Indian colonies. Port Out, Starboard Home, meant that your cabin would face away from the steaming mid day sun thru the canal from Port Said to Suez and further down the Red Sea. For us however, this has changed to Starboard Out, Doesn’tmatterhome – for short known as SOD. Starboard Out gives us a bit less shade on our balcony, but the reward is better views and better pictures.

We had first time travelled the Red Sea on the Corte Real, our huge container ship that took us from Hong Kong to Hamburg back in 2013. At this point in time, the Somalian pirates of the area were still pretty much at the top of their game. Having seen Tom Cruise play a hijacked sea captain fighting the bad guys first onboard his own ship and later as a prisoner in a lifeboat, we were rather happy when our captain ordered full speed ahead. He blinded all windows and portholes and put up water cannons all along the main deck. We were also shown the «Panic room», an area below deck that could be barricaded in an emergency, where crew and passengers could enjoy several days rations of water and food behind grenade-proof steel doors.

Nobody tried an attack, but we did have two speedboats circling us as we entered the Gulf of Aden. The captain played it cool as the boats did a full circle at high speed only a couple of hundred meters away from us, but his knuckles were white as he held on to his binoculars and followed their every move. Just a few hours later two NATO warships, patrolling the area at the time, suddenly appeared by our side to calm our nerves for the rest of the day.

Three years later on the cruise ship Costa Luminosa, and now on the Costa Fortuna, these waters are still treated with respect. Most passengers probably do not notice, but once you know what to look for the precautions against pirate attacks are not hard to spot. On the first evening after Suez the large windows by our restaurant table was covered up, and after dinner we could inspect the water hoses discretely laid out. They were, for sure, not there because our captain thought we might have to fight a Californian bushfire.

The Lanterna, the lighthouse at Genoa harbor.

The ruins of classic Olympia. 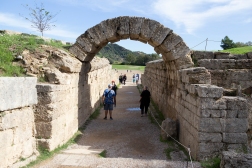 The original Olympia stadium, where the games were introduced in 776 BC and kept going for roughly 1000 years.

The good ship Fortuna seen form the bar strip at the port of Katakolon, from where we did our trip to Olympia. Our cabin is visible on the top row, near the front of the ship.

The port seen from our balcony.

Leaving Katakolon. Our starboard side balcony was right behind the navigation bridge – and two floors higher up!

Heraklion. The Venetian fortress in the background dates from the early 16 century.

You can never have a bad time visiting a Greek street bar!

Passing under the Friendship Bridge. The clearance is 70 metres, leaving space for very large ships to travel the canal. The barge to the right is one of several anchored elements that can easily be turned into a makeshift floating bridge if needed.

The bridge opened in 2001 and is the only permanent crossing of the canal. The many ferries have a much longer history. 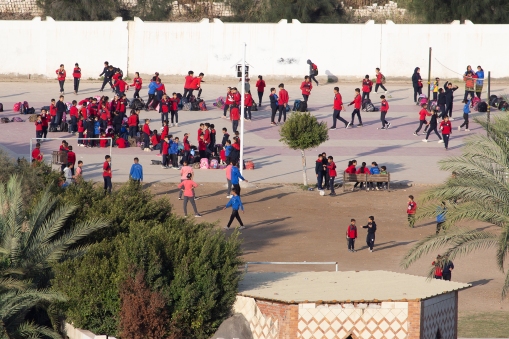 School kids in a break between lessons, not bothering about the big ships passing.

We were greeted by some doctors on the balcony of a hospital! We hope they were celebrating a successful operation! 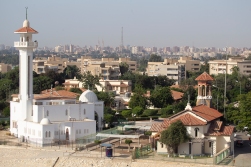 Egypt has a long tradition of mosques and a churches side by side! However, over the last decade, Egyptian Christian Copts have suffered increased religious discrimination and violence.

Army presence along the canal is heavy. There have been incidents where militants have been shooting at passing vessels! These guys were either saluting us or just shading their eyes from the sun, but in any case they helped make our journey safer!

Sea life from both the Mediterranean and the red sea has invaded the canal, and there are always people out fishing. However, when the big ships arrive they better take up their nets.

The Costa Fortuna was at the head of our convoy steaming south, and the car carrier Grand Sapphire was our closest companion.

The biggest town on the route is Ismailia on the banks of Timsah Lake. 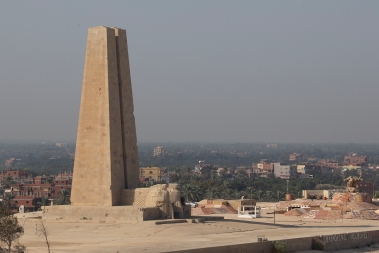 The Suez Canal has been the focus of several armed conflicts, the latest being when the canal was closed for 8 years following the 1967 Six-day-War. This is a monument to an earlier incident, the raid on the Suez Canal in 1915 when a German-led Ottoman Army force advanced from Palestine to attack the canal, then controlled by the British.

Dwellings for the rich and wealthy – for army officers maybe?

On the Great Bitter Lake we meet the CMA CGM Mexico, a sister of the containership CMA CGM Corte Real that took us north from Suez to Port Said in 2013.

The northbound and the southbound convoys meet at the Great Bitter Lake, and from here to the Friendship Bridge the canal consists of two lanes. To the left we see our southbound convoy entering the lake from the western Lane, the original canal, and to the right the CMA CGM Mexico and her companions entering the new eastern lane on their way north. This lane opened in 2015.

The scenery of the Suez Canal is no excuse for not knitting!

We pass the port of Suez. The canal trip is over and the Red Sea awaits us. The Al Badr Mosque in the background is probably known to all the world’s mariners!

One thought on “Riding the waves again”