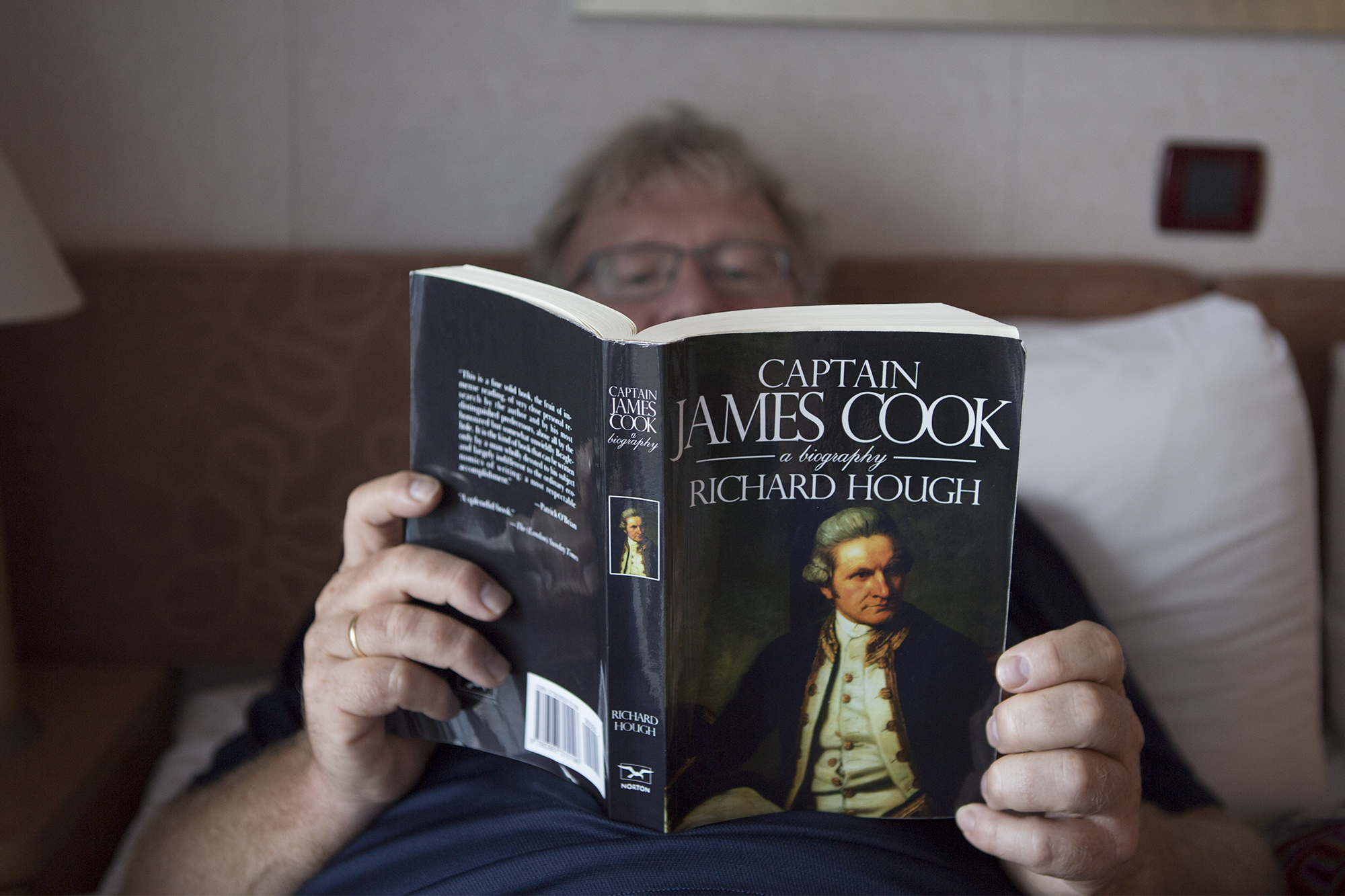 From the mouth of the Thames to the shores of Tahiti. From New Zealand to Hawaii, Tonga and Botany Bay. We have spent big parts of 2016 trailing the waters of the great James Cook. We have even carried his biography around the world, and we have visited his ship!

James Cook and Her Majesty’s Bark Endeavour left London in August 1768. Ourselves, we took our last look at the great river Thames in January 2016. At the time we were all heading for Tahiti, where our paths crossed again in May 2016, some four months later. James Cook took a bit longer, though, spending eight months before arriving there in April 1769. Unlike us, using airplanes, trains and buses, James Cook travelled the world at walking speed. The «Endeavour» was built for strength and not for speed nor comfort. During the three years of Cook’s first voyage around the world his ship did an average of 4 knots, or 7 kilometres per hour!

Cook landed at Matavai Bay on the northern shore of Tahiti, a short taxi ride from the island capital of Papeetee. Today the bay and its beautiful black sand beach is a memorial to the first visitors. A lighthouse dated is 1867, the anniversary of the 1767 arrival of the British ship «Dolphin», carrying the very first «westerners» to set foot on the island. Most of the attention however, is paid to William Bligh and Fletcher Christian and the men of The Bounty. They spent several months of 1788/89 anchored in the same bay, before the famous mutiny took place on their way back towards England in April 1789.

ES and DHH spent most of our time in Tahiti on the island of Moorea, close by. Cook came there too, but not until his third Pacific voyage in 1777. He came to the north island, to the very bay we visited, finding it «a paradise beyond compare» according to his biographer. His stay was not a happy one though; the visitors burned several villages on the island in revenge for the theft of some of the livestock they had carried with them from England.

On the «Costa Luminosa», in the fall of 2016, we have continued to cross paths with the great captain. We have been to Hawaii, then known as «O’Why’he», where Cook met his end and was killed and eaten (!) in February 1779. We have visited Tonga, where he came first time in 1773, and we have travelled the Cook Straight, the passage between north and south New Zealand that is named after his passage there in 1770.

Continuing west we visited Sydney, first put on a map by James Cook also in 1770. Heading south after leaving Sydney we passed the famous Botany Bay, named by Cook after the botanist on the «Endeavour». The same botanist, Joseph Banks, is credited with the idea of using Australia as an extension of the British prison system. The first shiploads of convicts arrived already in 1788. They were housed in tents set up in what is today called The Rocks, a picturesque part of downtown Sydney right next to where the «Costa Luminosa» was anchored during our time there.

Travelling the southern Pacific you come across numerous landmarks named by – or after – James Cook. DHH has earlier been to the Cook Islands, a sovereign nation named entirely after the discoverer. Ironically this is one of the places he never came to. Cook noticed this group of islands and mapped their positions, but he only set foot on one uninhabited cliff. The main island of Rarotonga where the Cook Islands capital is to be found, he never even saw.

What we did get the chance to see however, was Cooks ship from his first voyage. At the Maritime Museum in Sydney’s Darling Harbour lies a very accurate replica of the «Endeavour», built to sail the oceans just as the original did. On board we were guided from room to room by museum volunteers, telling us about the equipment, the cabins and the daily life of the 94 men who for three years shared a ship measuring only 30 meters in length. This is less than the width of our cruise ship of today.

The replica was built in Freemantle, Australia, in 1994, and has sailed as far as Whitby, Yorkshire, where the original was launched in 230 years earlier. For us, visiting the replica was the ultimate way to honour a remarkable sailor and navigator who has been with us throughout our entire journey.

Our circumnavigation of the earth is a good bit more comfortable than his. James Cook travelled the world about as fast as a man can walk, and his ship did a good bit more jumping when the seas were high! There is no doubt that the skills and bravery of the men of His Majesty’s Bark «Endeavour» will be remembered long after the world have forgotten all about the cruiseship «Costa Luminosa»!

The replica is exact in all known details. The work was possible because the original drawings from the rebuilding of the vessel in 1768 still exists.

DHH at «the head», the ships toilet seat at the very front. You had to sit on a plank with a hole in it, sticking out over the railing. All you had to hold on to, were ropes and beams. To clean your behind you would use the fibres at the end of a rope, seen in the picture. When you were done you would throw the rope back over the side, and hopefully it would be swept clean by the sea before the next man would need it.

ES has good reasons to look worried. No woman would be allowed near the wheel of the original «Endeavour».

The biggest room under deck would sleep 60 men at night, and it would be their mess and their living space at daytime. The replica is correct all down to the interior furniture and standing equipment.

The Endeavour was built to carry coal along the coast of England. In 1768 an extra deck was put in to accommodate all the men that were going with Cook, and to save space one of these decks was very low indeed. This is the officer’s quarter, and when ES sits down her head is exactly the height of the lowest beam. 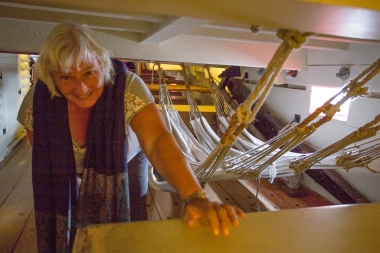 Cabins were for the few, the common sailors and soldiers had to do with hammocks. 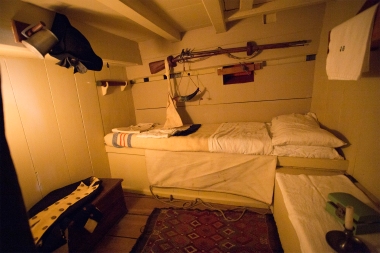 This is the cabin of the first officer, captain Cooks second in command. His name was John Gore, and he had roughly 2,5 square meters of privacy.

The captain’s quarters at the back of the vessel were shared between Cook and the scientists on board, above all botanist Joseph Banks and his many assistants. On this table both the navigators charts and the botanist’s samples were laid out. Behind the door in the middle of the picture we can get a glimpse into captain Cook’s private cabin.

The same room form another angle. The windows to the right points backward. 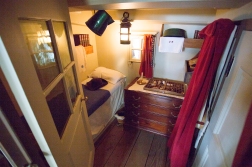 Joseph Banks’ cabin. Banks was a man of «society», and as upper class he saw himself as better then the rest. However, he also had to do with the 2,5 square metres at night.

A modern day Sydney tourist cruise company has taken Captain Cook’s name. Worse however, is that they also have stolen the Norwegian flag for use in their logo! DHH will forever avoid them like the plague!

In Sydney the «Costa Luminosa» lay right next to the statue of William Bligh. Mr Bligh is known as the tyrant captain that provoked the mutiny on the Bounty, but he also spent a few years as British governor in the Australian province of New South Wales. Bligh also has a strong connection to James Cook, he was an officer on Cooks third and fatal Pacific voyage.

Outside one of Sydney’s historic buildings stands this drawing of the harbour anno 1803. On the tiny peninsula to the left we now find the Opera House, and where there is a bridge to the right we find Circular Quay.

Roughly the same view today. To the right we see the «Costa Luminosa», almost covering the Circular Quay at the bottom of the bay. 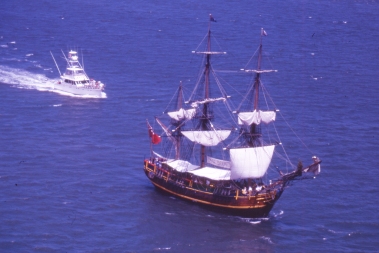 This picture from 1999 shows a replica of William Bligh’s Bounty, the scene of the 1789 mutiny. It was built for the 1978 movie starring Mel Gibson and Anthony Hopkins. When DHH was in Sydney for the first time this vessel was also part of the Maritime Museum, but today it is to be found in Hong Kong.

Matavai Bay where the «Endeavour» (1769) and later the Bounty (1788) anchored during their stops in Tahiti.

From Matavi Bay you can clearly see the saw tooth-like mountains of Moorea. James Cook did not take the trip there until his third voyage, in 1777.

The Bounty memorial in Matavi Bay. It has to be said that the fellow who did Fletcher Christian (left) and William Bligh in bronze might not have been the most talented artist in the Pacific.

The first European to reach Tahiti was captain Samuel Wallis on the British ship «Dolphin» in 1767. This lighthouse was set up to the anniversary in 1867.

ES on the beach of Moorea, a place that both she and James Cook found to be «a paradise beyond compare».

The archipelago of Tonga, another destination both we and captain Cook have visited. 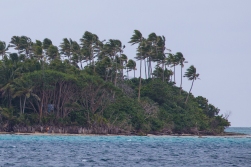 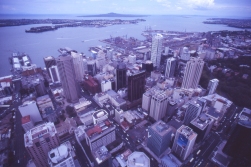 Auckland, New Zealand, as Cook never saw it. He found the bay and the harbour, but he never climbed the Sky Tower.

The Cook Strait, as he very much saw it. James Cook probably had a name for this rock on the southern side of North Island, but we do not know what that was.

Rarotonga, where the capital of the Cook Islands now sits, was ironically a place the great man never saw.

DHH met these three kids in 2000, on a beach on Rarotonga, an island very much worth a visit. 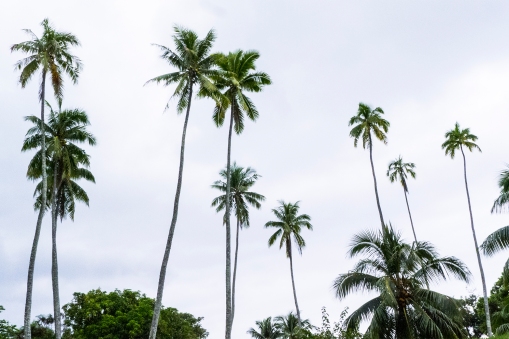 When the men on the «Endeavor» saw the hills of Hawaii it came as a shock. They were heading towards North America and found land where nobody knew there was any.

The «Costa Luminosa» leaving Hawaii. When the Endeavour left the men was also in shock, because their captain had been killed in a fight with the locals. 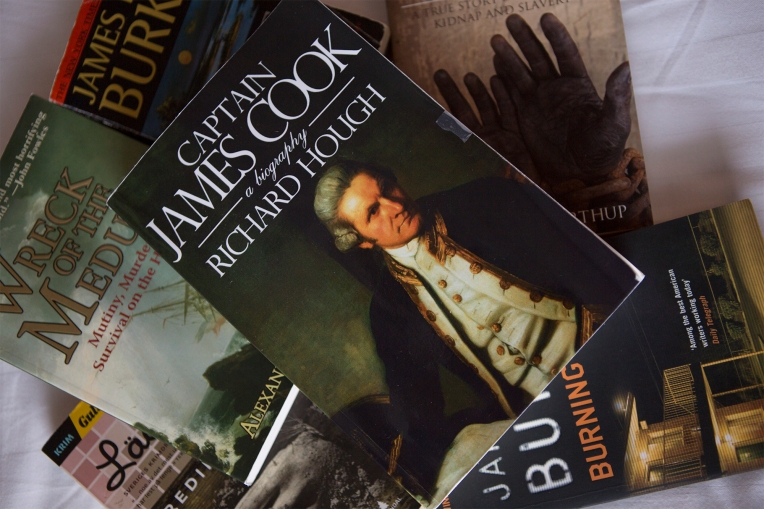 We took captain Cooks biography around the world. Both we and the book escaped O’Why’he unharmed, and when we reach Europe the copy will find a safe harbour in DHH’s future bookshelf.