Do you want to know how an airplane can fly? Try scuba diving. When you go down under and get the feeling right you do not swim thru the water. You fly.

You fly over the corrals, between the rocks and amongst the wildlife. You go over a cliff like a bird, being in total control, looking down into the deep. It is hard to describe, this is a feeling you will have to experience for yourself.

The reefs of Tahiti are beautiful wherever you go, no matter if you are in 20 meters or 20 centimetres of water. The difference is that you do not get the big animals while snorkelling on the beach. Diving off the coast of Moorea we had sharks in abundance, all lemon sharks and black tip reef sharks. Neither is very dangerous, but they are still impressive. The lemon shark can grow to 3 meters and the blacktip to 1,5. 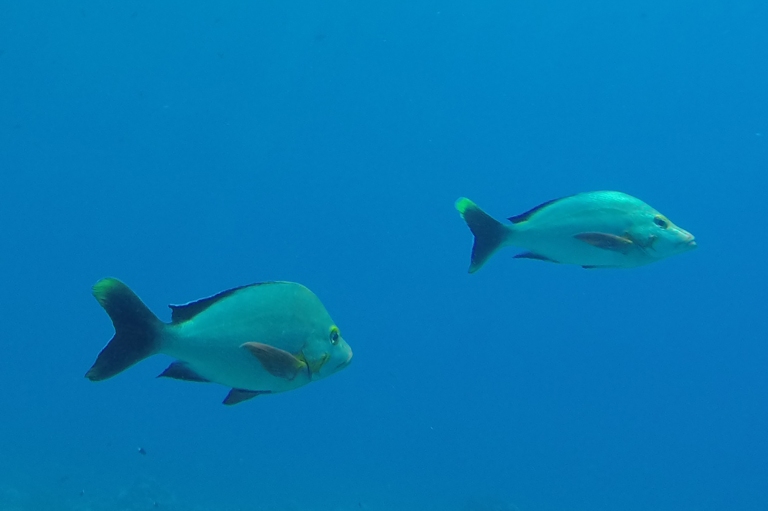 DHH has been diving with sharks various times, but this was the first time he had a camera. The pictures from the little Gopro he rented were surprisingly good. Most of these pictures are taken on 20 meters deep, where the light is a bit restricted and the red colours almost totally gone. The model he used only had a wide angel lens, so you had to be rather close to get a useful shot. The three sharks pictured here was never more than four meters from the camera.

The most dangerous animal in this picture series is probably the titan triggerfish. This stocky creature can grow to well over half a meter in length, and during the breading season the female guards her nest on the bottom with fearless aggression. DHH was attacked by one in Thailand some years back. They have sharp teeth and powerful jaws and can take a good lump of your flesh if they get the right grip. Luckily, the Thai trigger went for his flippers and not for his body. The Tahitian trigger on this dive was in a better mood however, and did not try any nasty tricks.

But never mind the sharks, the most impressive sights on this particular dive were the sea turtles. The turtle is shaped like a stone and looks like a sack of potatoes on land, but in the water it is a joy to watch. Ever seen a stone fly? It is an incredible sight, totally defying all laws of gravity. When they saw us the turtles were nice enough to settle on the bottom, and there they were more than happy to have their pictures taken! 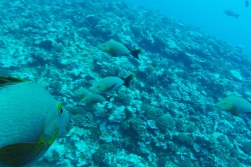 For the fish, us divers do not exist unless we can be identified as an enemy or a source of food. 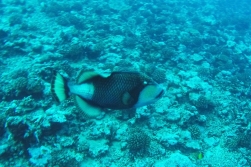 The Titan triggerfish can see a diver as an enemy if there is a nest near by. On this occasion however, there was none. 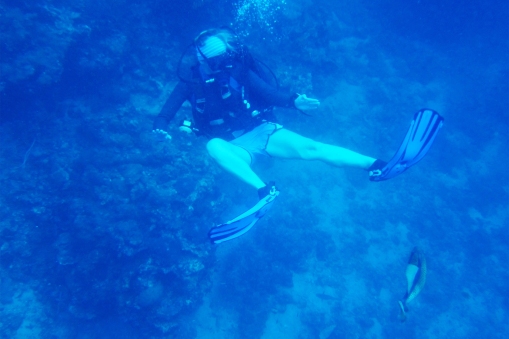 An angry mum. This is from Thailand in 2011, where the trigger first went for DHH and then for one of his diving companions.

This lemon shark is two meters plus, but the species is known for being rather peaceful with humans. 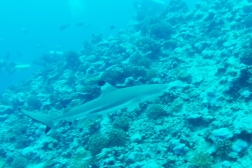 The black tip reef shark can attack swimmers, but as a diver you are much safer.

He had to circle back and take a closer look. The turtle did not seem to mind the attention. 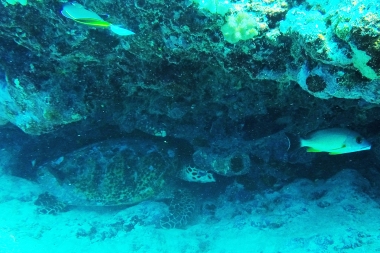 A second turtle flew past us and then landed in the shadows under a rock. The light was not good, so this picture cracks up a bit. 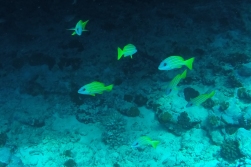 Most times, we go up and down on the rope from the boat. That makes it easier for the dive master to keep a group of amateurs together, and we have better control when we make the safety stop on our way back up.

The silhouette of our dive boat with a school of fish. 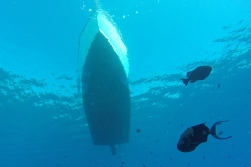 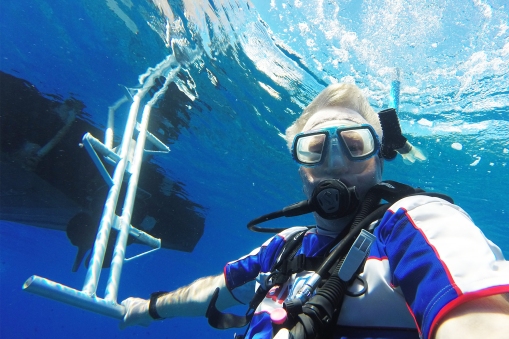 Fun is over. DHH in the process of finishing the dive and climbing back on board.

2 thoughts on “Going down under”