Over the last few years many westerners have started to proclaim Islam as the most violent ideology the world has ever seen. That only proves how easy we forget the crimes of which we ourselves are not the victims. Today’s ISIS has a long way to go if they want to reach the standards of inhumanity set by the Cambodian Khmer Rouge in the late 1970ies.

Cambodia, formally independent from the French in 1953, was also a victim of the «Vietnam War». Vietnamese trespassing across the border led to massive American carpet-bombing, and like in Laos there are millions of live devices left who kill and mutilate people to this day.

But when the US planes landed and the Americans fled Saigon, the worst was yet to come. From 1975 to 1979 Cambodia was ruled by what probably was the most brutal regime of the 20th Century, Hitler’s Germany included. Backed by Mao’s China, the Khmer Rouge spent four years forcing the urban population to work in a collectivized agricultural sector, abolishing all traces of the «old society» like money and banks and science and education. An estimated 2,5 million people were killed in the process, more than 25 per cent of the entire population! Hundreds of thousands died of starvation and lack of medical care, and those who have documented the Cambodian Killing Fields claim to have identified 1,4 million victims of executions.

We visited Choeung Ek a few kilometres outside Phnom Penh where 20.000 of those executions took place. What you see there is a tower in the middle of a green park the size of a football field or two. Inside this white pagoda-like building are 9000 human skulls, the remains of those who have so far been found.

You walk on narrow paths between sunken little fields, fields that are mass graves. Some places pieces of clothes or shoes stick out. This is the real thing, bones and personal possessions of those who died there occasionally find their way to the surface.

The killing was done manually. A club to the back of the head, a knife across the throat and then strait into the hole in the ground. A sign marks the spot where the tools for the killings were kept. We see the «magical tree» where the killers hung loudspeakers in order to play music and drown the screams. Another tree was used to dispose of babies and small children. They would be lifted up by their legs, their heads would be crushed against the trunk, and their bodies would go in the mass grave, often together with their mothers.

The Khmer Rouge wanted to break all ties with not only the outside world, but also with all other ways of living. People would be murdered for speaking a foreign language, for wearing glasses, for having had an education, for having owned a business or for having worked for the previous government. There were hardly any teachers or doctors alive in the entire country when the killing was over. You could be murdered for scavenging for food, for crying over dead loved ones or for having family that the rulers did not trust.

The majority of those murdered at Choeung Ek had probably been passing thru Tuol Sleng, a former high school turned prison and torture chamber by the red regime. At Tuol Sleng victims would be chained and kept waiting, often tortured to give up possible «collaborators» before taken away to die.

It is estimated that 17.000 people were processed thru Tuol Sleng. Seven adult prisoners, along with a dozen or so who were children at the time, are known to have survived. We met Bou Meng, one of two from the seven who are still alive. Bou Meng never knew why the Khmer Rouge came for him, he might have been given up by some neighbour who did not like him or by somebody tortured into giving a random name. His wife was taken strait to Choeung Ek and killed, and his two children later starved to death in a party «children’s home». In a book he has written, and that most days he sits in the old prison and signs, he tells of numerous beatings accompanied by questions and accusations he did not understand. This was all done by young guards hardly out of their teens. When he tried to say that he was innocent of what they accused him of, he was told that the Party never made mistakes. He was pronounced guilty for the very simple reason that he actually was in prison!

Bou Meng was an artist. He survived because the prison commanders needed somebody to make propaganda images of the ruler Pol Pot. The artist was allowed to work and to live, and when the Vietnamese army invaded in 1979 he was able to escape. He has made drawings and paintings of prison life not only for his own book, but also for the exhibition we can see in what is today one of the world’s most macabre museums.

In some rooms the Vietnamese found rotting corpses chained to beds. The beds are there still, and on the walls in these rooms hang pictures of the last occupants. Large paintings show whipping and waterboarding, they show people hanging from chained wrists, having their nails ripped out or nipples clipped off.

The strongest parts of the exhibition are the many rooms with rows of portraits, men, women and children. Like the Nazis before them the Khmer Rouge were very systematic. All inmates were registered and photographed before they were killed. These pictures, Bou Meng and his wife among them, now form a large part of the exhibitions in the former classrooms where people where once chained to the floor, flogged and broken and carried to their death.

On a cruise we did up the Mekong from Saigon into Cambodia a French professor at the university of Phnom Penh gave us a lecture in Cambodian history. A question we asked him was why this unlimited barbarism could happen, and why here? There are no definite answers, but he offered two suggestions. One is that the Khmer Rouge had a history to defend. The great Khmer Empire (year 800 to 1400) once ruled most of the region, and the ultra nationalist Khmer Rouge set its mind to recreating that greatness. To do that they wanted to destroy the existing civilization and take the whole country 800 years back in time. The other explanation is that Cambodia has a stronger tradition of political violence than any of the neighbouring countries. 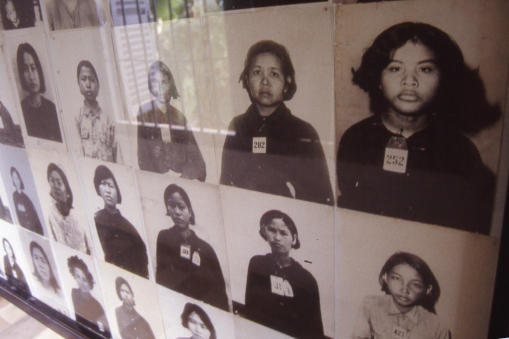 This is how most of the prisoners were kept, chained to the floor in what used to be classrooms. The paintings in the museum are made by former inmates. 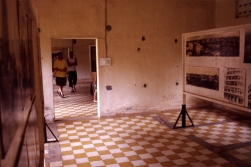 Torture was used to make inmates «confess» to crimes and to give names of their «collaborators». 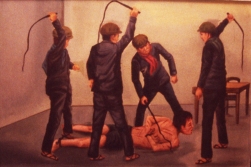 The prison rules, still in display in the schoolyard, explicitly forbid prisoners to scream or cry when they were beaten or given electrical shocks.

When the Vietnamese army took Phnom Penh in 1979 they found the prison evacuated. A few dead prisoners were still there, chained to bedframes in some of the rooms. This bed has been left as it once stood, and a picture of the dead prisoner hangs on the wall beside it.

Some of the rooms were converted into single cells.

Bou Meng was one of only seven inmates to survive Tuol Sleng. On most days he now sits in the prison signing the book he wrote about his experience. On the poster beside him we see the mug shot of his wife, Ma Yoeun. They were captured together, but she was taken straight from the registration office to Choeung Ek where she was killed the same night. Their two children were also killed by the Khmer Rouge.

This is Bou Meng1s image of how his wife was murdered.

Our professor would only partially buy our comparison with ISIS. Yes, the ISIS has the same brutality and yes, the ISIS also models its society on a medieval social structure. But the ISIS of today is also a product of globalization. Where the aims of the Khmer Rouge were local, the aims and actions of the ISIS of today are global.

The Khmer Rouge was brought down by their ambitions. Not content with controlling Cambodia they also provoked Thailand and Vietnam by attacking across borders into historic Khmer territory. It was this that brought on the Vietnamese invasion, not primarily a Vietnamese sympathy for a suffering Cambodian population.

The Khmer Rouge was only partially defeated in 1979. They held on to smaller, isolated areas where they, incredibly backed by the international society, were able to keep the conflict running until the death of Pol Pot in 1998.

On the surface, there is not much bitterness over the genocide in today’s Cambodia. Under the surface however, there is much pain from the fact that very few of the Khmer Rouge criminals have been brought to justice. Bou Meng has lived to see the director of Tuol Sleng go to trial, but in his book he writes about the pain of watching killers from the prison live as normal citizens in his own village. But too many of the powerful men of modern Cambodia have a past, including the president himself, Han Sen. The corrupt elite, and along with Laos Cambodia is corrupt to the extreme, make sure nothing unpleasant happens to them or their friends. For many survivors this means that history is not digested and many of the wounds are still open.

The mausoleum at Choung Ek just outside Phnom Phen. 20.000 people were killed here.

Our Cambodian guide Adam by the tree the Khmer Rouge used to kill small children. They would be picked up by their legs, and their heads would be crushed against the tree. Their bodies would be dumped in what is now the fenced area to the right.