With the sun shining, Halong Bay east of Hanoi in Northern Vietnam can be an explosion of green, blue and gold. When we came there however, the monsoon was there too, and the flat light created by the heavy skies turned most of the impressive sea sculptures into shadowlike shades of grey and black. But nevertheless, it was still very much impressive!

Halong Bay – there is magic in the word. According to the legend there once was a mountain dragon submerging into the sea, leaving several thousands of ragged little hills sticking out of the water. Another legend talks about the pearls the dragon had spread out over the water. James Bond was here once to save the world. However, only the landscape shots were taken here. James and the villain and their stuntmen only made it to Thailand.

Halong Bay is a UNESCO world heritage natural site – and rightly so! The karst limestone rocks and little islands (hardly any are populated) create an extraordinary sea landscape: little hills of any shape with holes and arches and caves. UNESCO has counted something like 1600 islands, guidebooks will mention close to 2000, and our guide on the boat told us there are exactly 1969 islands. It is easy to remember, he said, because the number is the same as in the year Ho Chi Minh died! 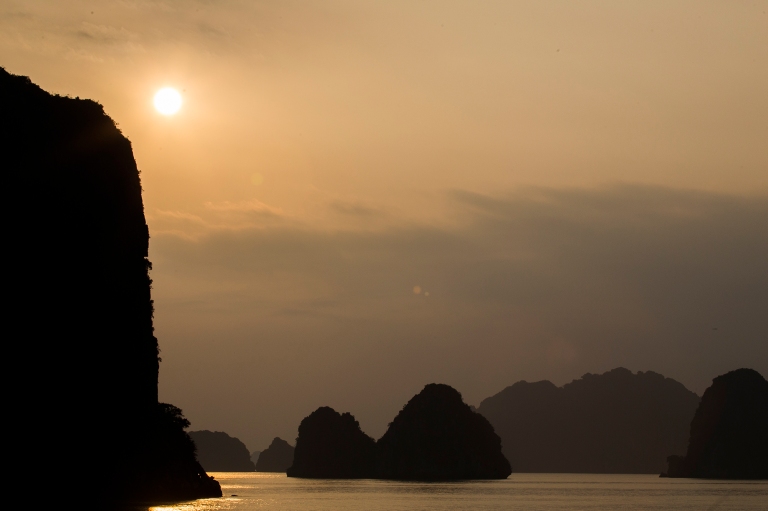 The magic of Halong Bay is widely known. Every day thousands of tourists are coming here (most of them, like us, on a tour bus from Hanoi), some only for a day trip, most at least for one night. We heard that there are close to 500 tourist boats cruising the bay, most of them close to Halong City. Our boat cruised a bit more east, but we were very seldom alone. But the bay is in no way crowed.

We were on our boat for 24 hours, enjoying every hour, watching this magic landscape passing by slowly.

We were on a Swan boat and can recommend that company: swancruiseshalong.com 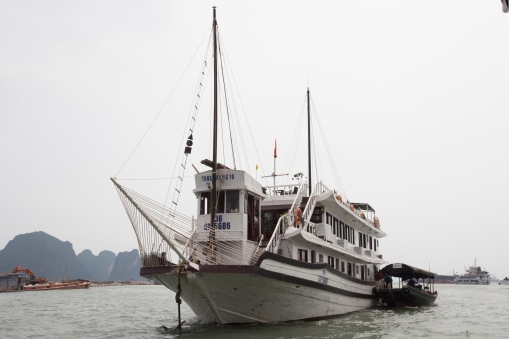 Our cruiser for 23 hours was the good ship Tung Trang. Those of you who speak Norwegian will note that this is not the most honorable name you can give a lady, but she seemed to take it well.

You could also come across some commercial shipping, but not so much that it spoiled the day. 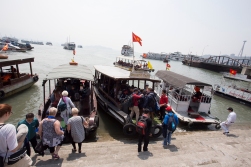 1300 hours is rushhour at Halong City. All the buses from Hanoi has arrived, all the new tourists are ready to board and all yesterday’s heroes are ready for the trip back to the big city. Make sure you follow the right guide in the crowd, so you get to the right tender and to the right cruiser.

While we were cruising the bay for fun, others were out there to do hard work.

A nice dining room with space for 24. Food was of course included in the trip we had bought.

We loved the sun deck, even though there was not a lot of sun. The Daughter did not care, she had a lot of sleeping to catch up.

We had a good cabin, but it was for three! The Daughter refused to be present when the picture was taken. 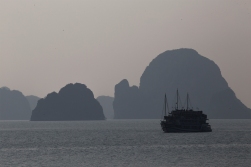 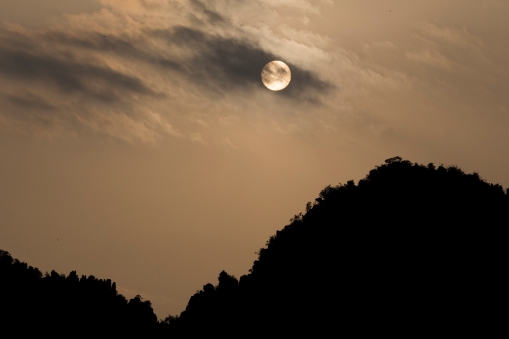 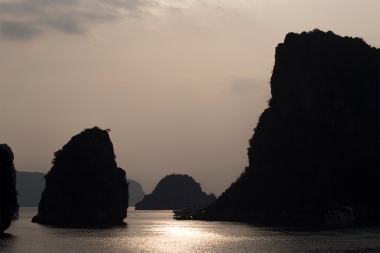 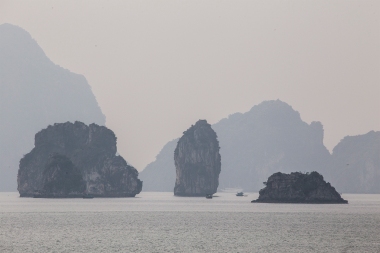 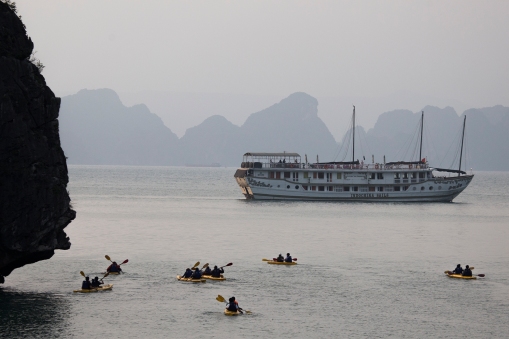 For those who wished to do something else than just islands spotting, activities included swimming, cave-walking and kayaking. 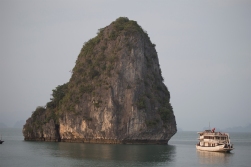 The local squid fishers have boats that stand out, but look at the lights in the rigging. They fish using lights in the night, basically unsustainable and outlawed in most countries, but very common here. 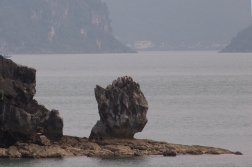 «Ha Long» translates to «Descending Dragon» in Vietnamese. We saw no dragons however, but we did see a small monkey doing his best to keep his head above water.

… and we did see an elephant drinking from the sea.