Don Det? Been there and bought a t-shirt! That must be the must obvious joke ever in the world of tourism and textile marketing. Unfortunately the shirts we found were too small, so we had to settle for a picture instead!

But we have been there, to Don Det and also to Don Khone, even if we bought no shirts. These are two small Lao islands in a universe of rock and water known as 4000 Islands, an archipelago created by the Mekong on the border between Laos and Cambodia. A river cruise starting in the Lao city of Pakse had taken us there, and we decided to hang around for a few more days before returning to the flat in Vientiane that we nowadays call home.

In between the 4000 islands we find the largest waterfalls of South East Asia. They block all boat traffic up the Mekong, and for this reason the French, around the year 1900, constructed a short railway across Don Khone and Don Det. Cargo could be loaded on to a train at one end, bypass the big falls and the numerous rapids on 5 kilometers of tracks and be loaded back on to a riverboat at the other end. After the Second World War the new built inland roads took over and the railway fell into disrepair. What remains today is a solid railway bridge with no tracks, the skeletons of two ports and a couple of rusty vintage locomotives.

We took a guesthouse on Don Khone. Don Det is considered backpacker-land, populated by those who are young and cool and by those who wish they were. On Don Khone the guesthouses are slightly cleaner, the restaurants slightly tidier, the laundry service slightly more expensive and the clientele slightly older. The value for money is still excellent, however. We ended up at the Dok Champa Guesthouse, run by a nice young couple in their early thirties. They have a restaurant and four guestrooms with balconies strait on top of the water, and they seem to make a fairly useful business of it. They take good care of their customers. We happened to overhear our next door neighbor complain about the bed, and later the same day the host comes back from town with a brand new matrass across the bow of his boat.

They also have a two year old son with a temper, by us named «The Future Owner». He spent his time lifting his shirt up and scratching his belly in public, not unlike part of the grown up male population. He also throws his mothers kitchenware in amongst the restaurant tables, climbs into the beer-cooler looking for stuff to drink and shamelessly kicks the family dog. We hope he calms down when he gets bigger.

We loved it at Don Khone. We spent one day walking south to the Somphamit falls on the islands west cost, and later tuk-tuking north across the bridge to the tip of Don Det. We also took a tuk tuk to the south of Don Khone, where a short and beautiful boat ride took us out to see one of the worlds few populations of freshwater dolphins.

It is easy to see why this area is called 4000 islands. Our guesthouse balcony on Don Khone can be seen exactly above the head of the white-shirted paddler in the background. 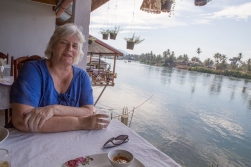 ES at our breakfast table.

The Dok Champa Guesthouse, where our kitchen staff eat their lunch at the table by the staircase. 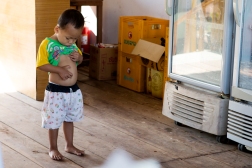 The Future Owner flashing his belly and inspecting the button.

Hardly any cars are to be seen on the streets of Don Khone. Traffic jams can still occur, however.

Our beautiful earth is a world of miracles, and one of them is that the motorbike-engines in Laos actually do work.

Where do the hip and the young on Don Khone meet on a Saturday night? Stupid question, they meet on the water of course.

But we also spent a lot of time on our balcony, enjoying the sights of the water just like we had on the cruise a few days earlier. Life was all around us also when we stayed stationary; the kids splashing, the mechanics banging on troublesome bolts on their engines, and the engines themselves sounding like anything from a sowing machine to a flying machine depending on the speed and size of their attached boats.

No cars on Don Det either, so it is mopeds and bicycles for both visitors and locals.

Don Det village was the railways northern port, and the skeleton if the old crane is still to be seen. 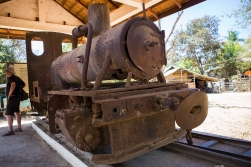 The tracks from the old railway are gone, but and old locomotive is still on display near the bridge. 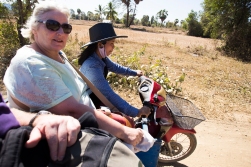 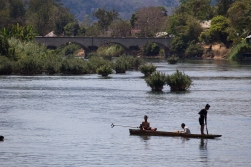 The French connected Don Khone (to the left) and Don Det with a railway bridge, built in 1910. 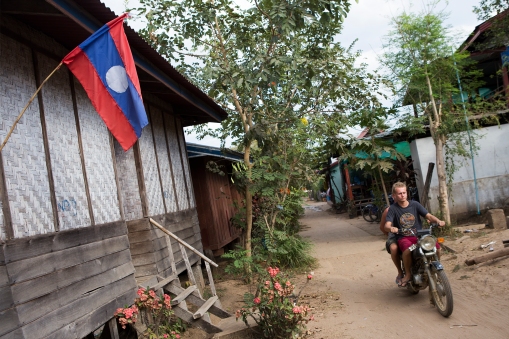 Don Det main street is not the most exciting of places to take a promenade. All buildings face the water so all you see are the back walls.

On a beautiful and peaceful early morning we went in a Dolphin-safari from the south tip of Don Khone.

A huge tree marks a bend in the river arm between Don Det and Don Khone.

Not the best of dolphin-pictures. The animals could be both seen and heard, but they were way to quick for the photographer (and the filmer).

We hereby recommend Don Khone to the rest of the world. We had three great days. If you go there and decide to take a few more, you will not regret it. Then you also have a chance to do Don Det, and if you are a bit slimmer than us actually buy the t-shirt!